Top 10 Reason Why Back to the Future, Part 2 is Really Really Bad 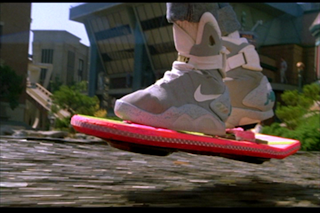 My wife runs like a maniac- Multiple marathons, daily miles, random 5ks, etc...
She slowly got me to start running. Although it's been years and I still can't go very far or very fast. That being said, I have progressed. This year was the first year that I learned how to run on a treadmill. I could never do it before. It was just so boring and not the same as being outside. A couple of sub zero degree winter days, a TV moved to the basement and DVD player have now changed that. I can finally run on the treadmill as long as I have a DVD to watch. Of course, I don't have many great DVDs. This has forced me to often watch some bad old movies. My intentions were noble last week when I started watching Back to the Future. A simple mindless and enjoyable popcorn flick. Perfect for running. However, I got a little lazy and didn't change the DVD after it was completed. And the DVD was the whole B2F Trilogy. So I resorted to Part 2. Which leads me to today's post.-

TOP 10 REASONS WHY BACK TO THE FUTURE PART 2 IS REALLY REALLY BAD.

10 - They switched Jennifers. Somehow Elizabeth Shue becomes Marty's Girl. A step up I suppose but they didn't think we'd notice?

9. Michael J. Fox in drag. The future Marty McFly has a son (played by MJF and oh yeah a daughter not played by Elizabeth Shue, but by Michael J. Fox again in drag. I guess the McFly genes are the dominant ones)

8. Flea. Why is Flea from the Red Hot Chili Peppers in this film? I suppose this could be the 8th reason the film is good too?

7. Cowboy Billy Zane. Yep, Billy Zane is in the sequel as one of Biffs cronies. Not sure what's worse the movies he's done before Titanic or after.

6. No Crispin Glover. That wacko is a genius. Suppose that's why he chose not to be in the film.

5. The closer we get to 2015 this movie just keeps getting worse. Transparent ties?

3. LOST the TV show. Now that we have a new canon on time travel Back to the Future 2 becomes more irrelevant.

2. Teen Wolf. Let's face it Teen Wolf came out right after Back to the Future Part 1. That was a good enough sequel for me.

1. No Huey Lewis tune.
Posted by Gene Fitzpatrick at 2:39 PM No comments:

The business of life has been unbelievable. Like many of us, I'm just trying to keep work moving. Things have slowed down a lot in the marketing and advertising business as they have everywhere else. I notice nowadays you have to work that much harder for less lucrative projects and scenarios.

As well, I've gotten involved in my local town and have been either attending meetings, volunteering, campaigning or just supporting something every day of the week.

Then on top of that "Hometown Tales" has been really busy as well. More requests for shows, more email than ever and even a lot of sponsorship interest. The only problem is both Bryan and I have been so busy. Bryan has a blossoming family with kids that just keep growing.

I do have a wife as well they oddly enough still enjoys my company. I'm looking forward to finally just having some good ole' fashion fun. Hopefully this summer.

Of course, all that being said - Life is still fun.
Posted by Gene Fitzpatrick at 2:43 PM No comments: