The Ninetieth by Don Fitzpatrick

This is a really awesome poem written by my father for his brother Gerard's 90th birthday.  I'm really proud of both of them.  They are both amazing guys and tremendous role models exemplifying toughness, knowledge, health and all around great character. Oh yeah, I made the type of the poem a little bigger. If you are my dad and uncle's age, a bigger font is greatly appreciated.

This is all about Gerard, Jerry to you
So let’s try to capture these years in review.
It started on Prospect, the street by name,
1908 by number, untarnished by fame,

We lived in a house red brick and attractive.
It was well maintained and a nice place to live.
Five stories up and sixty-two steps down
My God how an elevator would have given it renown.

We were a family of four, due to Dad’s early demise;
Raymond and Gerard and me of small size.
Gerard took to the street like an Olympic athlete;
It was stickball and football and roller hockey too
Any game that you can he played in the street.

He got in no trouble at St. Thomas Acquinas
An altar boy in white surplus and red cassock
But the black-frocked nuns gave him B Minus
So he joined the hoopsters and they were the finest

It was on to high school on Moshula Parkway.
De Witt Clinton by name, labeled in fame
Spanish and Math consumed the long day
Those subjects were required to make a good living
The times were bad; you needed a job that would pay.
And Mother struggled hard at the top of that house
She knew how to make pot roast last for a week
Putting wash on the clothes line so high in the air
And garbage on the dumbwaiter before it could reek,
And war clouds arrived to give us a scare.

Raymond was exempt he was our sole support
And Gerard joined Equitable Life.  His stay was short
For the navy called, they would teach him to fly
They trained him intensely, his first post at RPI
Then Banana River, Georgia Tech, Minneapolis too.

He wrote to mother like a good son should
I read the letters when she was through.
I memorized names and events too.
I was a kid in awe of my big brother
And I could hardly wait to sail the big blue.

He was off to the Pacific where the events were horrific.
He was a radio gunner on a bulky PBY.
They flew over a tragedy on the way to their station
And took their place in defending this nation.

Some months passed, they went out on patrol
Then a typhoon caught them, they went into the drink
But a destroyer came by before they could sink
The war neared its end,  the U.S gained control.

At home Raymond married and left for the army
And I was now the wage earner
At seventeen years I awaited my call-up to the army as well
But my big brother was a sailor and I changed my plan
Joined the navy too and that was just swell.

I left before he returned but I remember his letter
Advising me on life away from the home
Keep your hat squared, obey the bosun
Choose your friends carefully – it was just like a poem
And  his last caution -  Remember you’re a Catholic.

We both returned through God’s good graces
And he began to date a girl named Patricia
And soon the bells rang and they began life’s traces
In Long Island they settled and were off to the races.

So how long can this trite missal continue?
You know that you’re all part of the story.
For a life is not just made of years.
It’s footsteps in the sand, one after the other
In a strait line looking forward to the next.

So here are the footsteps we all love so well
To John and Nancy and Diane too, to Patty and Kathy
We can’t forget Robert; a crew that’s real swell
Then the next footsteps make their place in the sand
They’re contributions just grand.
To Kevin and Kathleen and Kerry in one group
Now on to the next in one swell foop
To Kerin and Meagan and Brianne they’re part of the loop
And Janine and Brendan, hold onto your hats
There’s still Christopher and Mathew; I think that’s the end,
But there’s so many little ones just round the bend

And Carol and I have been privileged to share
So many gatherings and journeys in fun,
Starting with Willow Dell and Chestnut Grove
Where James and Rob – a rowboat they stove.

The Grand Canyon and the QE2, to Portugal we went
And let’s not forget Ireland. To Scotland and Alaska
To name just a few and Christenings and Weddings,
It’s been quite a blast.
If there’s a proverb to sum up to celebrate this day
Just join me in words to dedicate this way.

There are four cardinal sins – Lying, Stealing, Swearing and Drinking.
So if you must lie, lie in the arms of your Creator
And if you must steal, steal away from bad companions.
If you must swear, swear allegiance to your flag.
And if you must drink, lift your glasses with me
To toast Gerard – a son, a brother, a husband, a father,
A grandfather, a great grandfather, a father-in-law
And the best thing of all – just a grand guy. 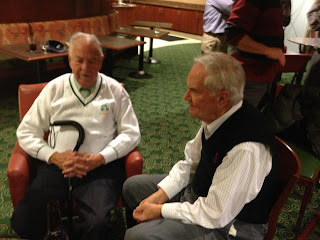 Posted by Gene Fitzpatrick at 1:00 PM No comments: